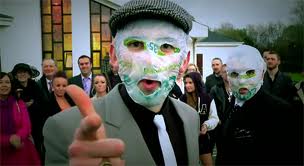 As a resident of Limerick city I am growing a little weary of seeing the Rubberbandits profiting from its terrible image problem. Their crass sense of humour and f**k you mentality is only adding to the negative perception people have of our city. They are feeding into the view of Limerick as an 'anything goes' kind of place which is wrong. There is nothing funny about the generational poverty and the large proportion of its citizens who cannot afford a mortgage. Its notorious housing estates of Moyross and Southill are known throughout Ireland. The 'stab city' image is so ingrained in the national psyche that there Limerick City Council has to employ a full time 'communications executive' in order to keep Limerick in the headlines for the right reasons. This perception of Limerick is not limited to Ireland/Northern Ireland but goes beyond this island into the UK, where some of its national newspapers such as 'The Guardian' have run some negative stories in the past. The joke is wearing thin lads...
Posted by Andrew Mc Carthy at 07:50 No comments:

Email ThisBlogThis!Share to TwitterShare to FacebookShare to Pinterest
Labels: The Rubberbandits

Greece - you had it coming..

Even though my heart goes out to Greece for their economic woes, and especially to the younger Greek generation, its hard to avoid the conclusion that their culture of crony-ism and tax dodging has come back to haunt them. It is astonishing that a government was willing to lie to EU officials about its finances in order to get into the single currency and then reluctantly admit several years later that they had inflated their figures. Their recklessness has endangered the Euro as a project and their impending default could have severe consequences for other struggling countries like Ireland in the Euro zone. It is officially estimated that Greece's coffers are hit with approximately €15 billion a year in unpaid tax. Now as the recession gets deeper in Greece one cannot see how they are going to repay all their debt of €340 billion on top of the bailout money. Europe was duped by Greece and we all could be paying a heavy price for this deceitfulness..a case of more stupid than clever.
Posted by Andrew Mc Carthy at 07:20 No comments:

Great to see the Heineken cup back again and what a first weekend. As a Munster fan I was on the edge of my seat watching the last five minutes of the game against Northampton in Thomond Park, the team just never gave up..and were rewarded after an epic 41 phases by a superb drop goal by O'Gara. The fact that they didn't knock-on and were able to keep possession was an incredible feat. Overall I think that the final will be between a French and English team. Its hard to look beyond Toulouse, Saracens, Leicester and possibly Clermont for the title. Undoubtedly its the best rugby competition in the Northern Hemisphere, and probably the world for that matter.
Posted by Andrew Mc Carthy at 13:27 No comments:

Watch this video - great stuff!
Posted by Andrew Mc Carthy at 11:44 No comments:

I was staying in the Jury's Inn on Parnell Street, Dublin this night last week and I am convinced I saw a ghost in room 467 - it was a young man with short cropped hair, a black silhouette... I was not asleep at the time and it appeared very shortly after turning off the lights. I actually thought it was someone trying to rob me and I made a swing at it.Has anybody else heard of sightings in Jury's Parnell street?? I would be very interested in knowing.
Posted by Andrew Mc Carthy at 09:01 No comments:

The All Blacks are such world cup chokers

Its astonishing how the All Blacks mentally crumble where they are challenged at the highest level of rugby. For a team that is consistently at the top of the world rankings between world cups it never fails to amaze me how they just can't handle the pressure of knock out rugby. In last Sunday's final they were missing crucial kicks at goal and had to rely on dodgy refereeing decisions in order to win the Webb Ellis trophy for the second time. If the  competition had been held in any other country I very much doubt that many of those decisions would have gone the All Blacks way and that France would have won their first world cup. The favourites tag really doesn't sit well with the New Zealanders..
Posted by Andrew Mc Carthy at 08:15 No comments:

I hope the electorate will see the light and not vote in Sean Gallagher who has been trying to distance himself from Fianna Fail for the last few weeks. It would be a step backwards for this country if a FF leaning president is voted in and I still don't know what he represents. He is a an unsuccessful businessman with very few achievements worth mentioning, I don't care about his youth work..The guy is a Fianna Fail bag-man, he is dishonest and should not be president as he lacks the integrity that's required for the position. Wake up people!
Posted by Andrew Mc Carthy at 15:26 No comments: